The mission of the Riverside Philharmonic is to entertain Riverside with excellent performance of great music, to enrich the young and the young at heart with the beauty and relevance of the symphony, and to engage our diverse and dynamic community in an appreciation of the performing arts in the Inland Southern California region.

Established in 1959 as the Riverside Symphony, the community orchestra’s debut concert was held on April 7, 1959 at Ramona High School. It was a sell-out. The Philharmonic has been delighting its audiences ever since with performances of well-known masterworks, newer compositions and world premieres. 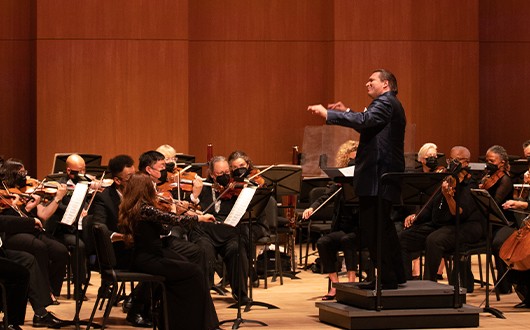 Today, the orchestra is comprised of top talent of professional musicians who perform for film, television and soundtracks. The orchestra has been acclaimed by local and out-of-town critics for compelling performances, its unique programming and exceptional roster of guest soloists.

Most concerts are performed in the state-of-the-art concert hall at Riverside City College’s Henry W. Coil Sr. and Alice Edna Coil School for the Arts in downtown Riverside. The orchestra also appears throughout the region, including the Ramona Bowl, Lake Elsinore, Fallbrook, Lake Arrowhead, and Temecula. The Riverside Philharmonic is proud to perform at the annual patriotic Concert for Heroes at Riverside National Cemetery as part of Independence Day observances.

Since winning 1st Prize at the 2003 Eduardo Mata International Conducting Competition, conductor, composer, and violinist Tomasz Golka has appeared throughout North and South America and Europe to great critical acclaim.

As guest conductor, he has appeared with the symphony orchestras of Seattle, Fort Worth, Buffalo, Spoleto Festival USA, Warsaw Philharmonic, Baden-Baden Philharmonic, Sinfonia Varsovia, as well as numerous orchestras throughout Mexico, including those in Xalapa, Mérida, Queretaro, Guadalajara, Boca del Río, Guanajuato, Puebla, Aguascalientes, Chihuahua, Juarez, Monterrey, Saltillo, and the OFUNAM in Mexico City, as well as Puerto Rico Symphony in San Juan and in Concepción (Chile), where he was Principal Guest Conductor. He has collaborated with some of the world’s top soloists, including Susan Graham, Alisa Weilerstein, Gary Hoffman, Inon Barnatan, Miriam Fried, Yuval Yaron, Joseph Swensen, and his pianist-brother Adam Golka.

Golka has served as Cover Conductor for Rafael Frühbeck de Burgos, the Boston Symphony Orchestra, and the Cleveland Orchestra. He was a semi-finalist in the 2010 Solti International Conducting Competition and the 2005 Malko International Conducting competition, where he conducted the Frankfurt Radio Symphony and the Danish Radio Symphony, respectively.

A composer of both film and concert works, he was named Composer-in-residence of the 2018 Boulder International Chamber Music Competition, which commissioned his piece “True Green.” He composed scores for the films “Shaking Cup” (2019), “The Dare” (2018), and the web series “Pagan Holidays” (2019). His concert works have been performed by the symphony orchestras of California, El Paso, Williamsport, Boca del Río, and the Suffolk County Festival Orchestra.

As violinist he has appeared as chamber musician and soloist throughout North America and Europe.

As a conducting fellow at the 2006 Tanglewood Music Festival, Golka conducted a historic performance of Stravinsky's Soldier's Tale with legendary composers Milton Babbitt, Elliott Carter, and John Harbison as narrators – a recording that is now available through the Boston Symphony. He has also recorded Ciranda das sete notas by Heitor Villa-Lobos for Melo Records. He was also a fellow at the Aspen Music Festival in 2002 and has conducted in masterclasses for such esteemed conductors as David Zinman, Yuri Temirkanov, and Daniel Lewis.

Born in Warsaw, Poland in 1975, Golka’s family emigrated to Mexico in 1980 and to the United States in 1982. His conducting teachers were David Effron (Indiana University), Gustav Meier (Peabody Conservatory), and Bernard Haitink. He has a Certificate in Film Scoring from the prestigious UCLA Extension Film Scoring Program where he was the recipient of the coveted BMI/Jerry Goldsmith Film Scoring Scholarship. He also holds Bachelor's and Master's degrees in violin performance from Rice University, where his teachers were Sergiu Luca and Kenneth Goldsmith. His other violin teachers included Tadeusz Wronski and Marina Yashvili. He is fluent in Polish, English, and Spanish.